Link to the Article originally posted in the Santa Clarita Signal (signalscv.com)

Seniors from the Foothill League proudly wore their baseball uniforms — and although the players compete for rival teams, it was just another day with friends, a moment to joke, ask where they applied to college and participate in a giant group photo before the season started.

On Sunday morning, seniors from Saugus, Hart, Canyon, West Ranch, Golden Valley and Valencia gathered at the William S. Hart Baseball complex for a photo together. Many baseball players have known each other since Pony baseball, playing together on travel teams and becoming friends outside of school.

Jeannette Egan, a Hart High School parent, thought the athletes deserved a moment to remember their senior year and helped organize the event. She enlisted coaches and parents from various schools to organize it.

“I thought I would do something nice because they missed almost two years of their high school experience, and to get them all together,” Egan said. “I thought it would be special for them to get together and make the best of it for their last year.”

Additionally, Egan enlisted the help of Michael Schnyder from Skybound Creative Studios to take the aerial photos and Erik Figueroa from Fig Design to create the banner recognizing all the schools represented in the photo.

Figueroa and Schnyder both volunteered to help highlight the athletes because of how important it was to the seniors and the community members who support their student-athletes.

Egan was happy to take on the stress and task of organizing the photo event because, like her son Ryan, many of the seniors grew up on the diamond.

“I want them to remember this place as part of their childhood where they started playing baseball,” Egan said. “I don’t want them to forget that they all played together as little boys and now as gentlemen.”

Hart pitcher Chris Moreno has played baseball since he was 6 years old and felt a close bond with the seniors from rival schools. He said playing against his friends is a fun competition. He enjoys seeing his childhood friends from the youth leagues on different teams and goes up to them to joke, congratulate and inspire each other.

“There’s always a little bit of rivalry with everybody, but in the end, we’re all good friends, and nothing really gets too out of hand,” Moreno said. “It’s all for the fun of the game.”

Additionally, Moreno added he’s excited for the upcoming season to play with and against friends, but predicted the Indians would retake the league title.

Maurice Edwards Sr. enjoyed this opportunity for his son to hang out with friends and see the kids they knew growing up to be great athletes. He said the last two years have been rough for all students and congratulated the athletes for their competitive nature while keeping a smile on their faces during a pandemic.

Edwards Sr. is excited for the year, the changes to Golden Valley’s baseball program and all the talent coming from the Foothill League.

“Kudos and hats off to every kid out here being able to deal with the pandemic off and on the field, and now all of them trying to be recruited with all the rules and everything going on, it’s just been very difficult,” Edwards Sr. said. “So, keeping a smile on their face and being able to persevere, it’s been excellent to watch.”

I’m honored and humbled to be named the head baseball coach of Golden Valley High School.  I have many years coaching baseball as both a player, and a coach.  For many years, I’ve been a resident of the Santa Clarita Area, and I’ve come to know the drive and work ethic of the Golden Valley Baseball program, and I intend to continue the legacy.

A little about myself, I have over 25 years working in the corporate world as a Software Engineer.  I am a graduate of the University of Kansas with a BA in History and Political Science, and subsequent educational stops at Georgetown University, and UCLA Extension.  I come from a huge baseball family with over 10 years coaching experience at the baseball academy, high school, and travel ball level.  All of those years my wife AnnMarie has been there by my side.  My son Aidan is an aspiring baseball player, and intends to take his talents to the next level.

Like all of you, I’m eager to put Golden Valley back on the baseball map with class, and dignity.  I’ve had the opportunity to meet a number of you, and I’m glad that you’ve entrusted me with the betterment of your child, and I intend to build a program based on Accountability, Loyalty, Character, and Discipline.

Grizzlies Baseball YouTube Channel is now live. With our new camera systems we are able to post several different views of the field for those of you who wish to view game footage. 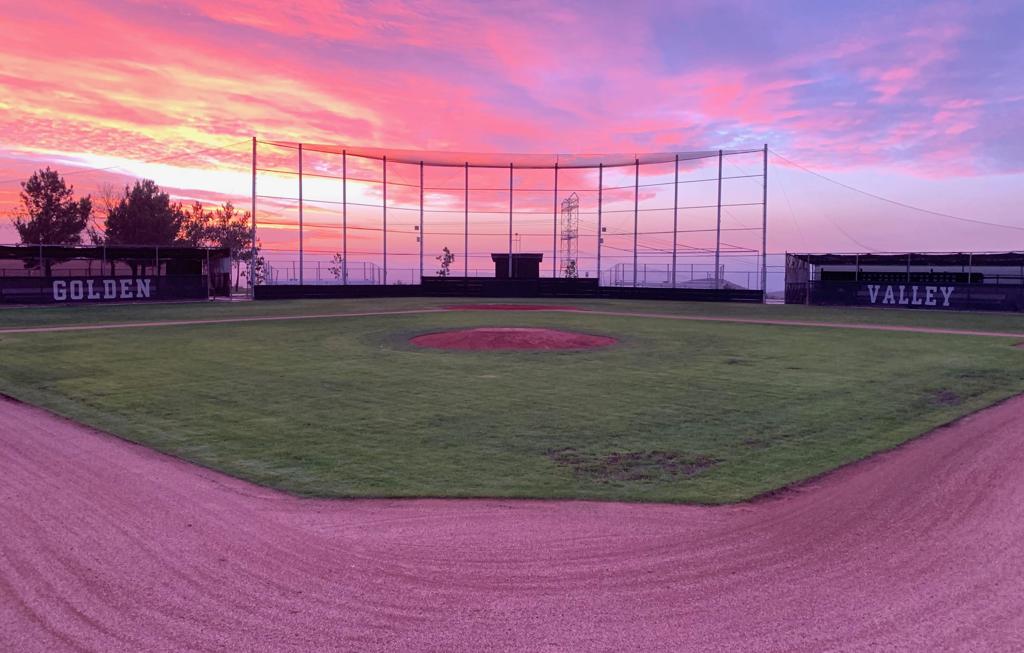 A January sunset over the ball park

Grub Nights are Back!

Our first Grub Night of the 2021-2022 Baseball year was held on September 21st. This Grub Night was at Round Table Pizza in Canyon Country. Round Table supported Walk in and Pick up orders all day long. Come on out to all out Grub Nights and help support Grizzlies Baseball and one of our local businesses. See you there!

Grizzlies Baseball YouTube Channel is now live. With our new camera systems we are able to post several different views of the field for those of you who wish to view game footage.

Want to become part of the team? Want to get additional exposure for your company or cause? Become a Grizzly Baseball Sponsor! Sponsorships include a company banner proudly displayed around the GVHS Baseball field.

You will find more information here.

Please download the Sponsorship application by clicking the link below.